In the most recent episode of my podcast Hemispheric Views I mentioned the time I was featured in the Workbench section of Amiga Format magazine.

I loved the Amiga, and I subscribed to Amiga Format in addition to a few other British and Australian Amiga magazines. The highlight of my month was riding my bike to the newsagent to collect my reserved copy.

I always liked the productivity and system utility applications more than gaming. I was a weird kid like that.

Amiga Format’s Workbench section was the Discourse forum of its day. People would write in with questions (with letters as this pre-dated email) and the magazine experts would publish the question and provide a helpful response. It was this section where I learned so much and to this day, Internet forums are still the best way to learn things.

In any case, I recall being stumped on a problem so I wrote in to Workbench asking for some help. I am sure I sent it via Airmail, but even still, getting a letter from Australia to the UK, then into the printing and production cycle resulted in something like a 6-month lead time. I think I had forgotten about it after a couple of months.

Imagine my surprise then, when months later, I see my name in print, in the world’s best-selling Amiga magazine. This was huge! It was the April 1992 issue. That would have put me at 14 years old. Maybe I was 13 when I wrote the letter, who knows?

That takes me to now. My friend and podcast co-host Jason Burk writes the best show notes in the podcasting business. He found and linked to an entire online archive of Amiga Format magazines. This was what I needed. I found my Felix the Cat cover, and brought up the issue.

There it was. Page 209. Workbench. “Missing Drawers”, from “Andrew Canion, Australia”. My letter lives on. 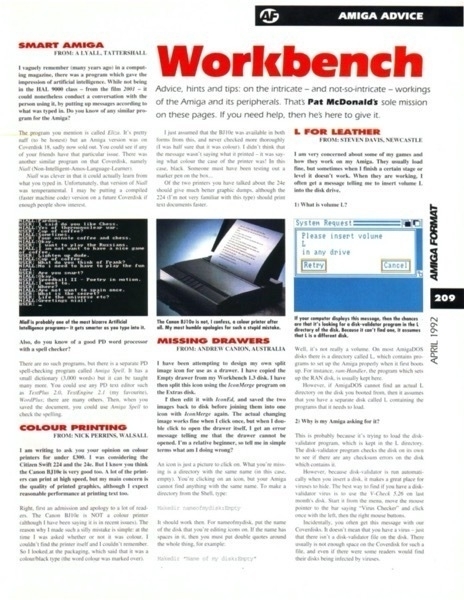 I have been attempting to design my own split image icon for use as a drawer. I have copied the Empty drawer from my Workbench 1.3 disk. I have then split this icon using the IconMerge program on the Extras disk.

I then edit it with IconEd, and saved the two images back to disk before joining them into one icon with IconMerge again. The actual changing image works fine when I click once, but when I double click to open the drawer itself. I get an error message telling me that the drawer cannot be opened. I’m a relative beginner, so tell me in simple terms what am I doing wrong?

It should work then. For nameofmydisk, put the name of the disk that you’re editing icons on. If the name has spaces in it, then you must put double quotes around the whole thing, for example: